I know the title sounds a little weird, but I promise you it is related to coffee and is quite a suitable title, just bear with me till the end of the post.

So most of us know ( I am assuming) that coffee (what we drink) comes from the fruit which is from the coffee plant, part of the plant family called Rubiaceae (Rooby- ea- see- ya ), that includes the genus ‘Coffea’ (if you didn’t know that ….well bingo now you do). Genus is the classification under which species come (Plant Family —> Genus —-> Species —> Variety)

Are you with me so far? So, we now know of 4 species of Coffea genus out of more than 120 different ones.

Now just to understand “Species” are supposed to be any organism that can re-produce off-spring (naturally) that is/are viable (Sage,2017). Now science says that normally 2 different species cannot reproduce to have a viable offspring.

Now a little off-topic, but stay with me.

There is something called as Chromosomes that contains genes, correct? We all might have heard of x chromosomes and y chromosomes (at least in sci-fi movies). So humans have 23 pairs of chromosomes, which means 46 chromosomes in total, 23 from each parent.

Are we cool so far? (congratulations now you know some more cool stuff)

Coming back to our Coffea species, all of the Coffea species (120 + of them) have 11 pairs of Chromosomes that means 22 chromosomes, except one particular species.

That one special species is ….. tada… “Coffea Arabica”

So the important question is to the plant Arabica, which has been the most popular Coffea plant species ……. “Who is your daddy?” 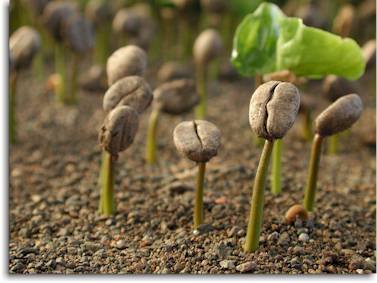 Well the answer is  that Arabica was produced with the mix of two different species……… and those are………..  wait for it

COFFEA CANEPHORA (ROBUSTA)     &     COFFEA EUGENIODES  (yes this is yet another coffea plant from the same genus, out of those 120+ other species)

Arabica technically is almost like a miracle, of which we are happy.

On the other side as James Hoffman says, Robustas were always thought of as the ugly sister of Arabica, until they found out that wait Robusta is actually one of the parent plants. Now the birthplace of this miracle occurrence is sort of still in questions, some say southern Sudan, some say Ethiopia, but regardless the Arabica species just got super famous everywhere starting in Ethiopia.

Now that its known that Robusta is one of the parents, scientists understood why is it more challenging to breed Arabica and Robusta together, it has happened but unfortunately not a very likable outcome.

Yes that’s right ‘Arabica’ x ‘Robusta’ exists 🙂  it is called as ‘Arabusta’ ( no brainer) but officially it is named as “Timor”.

With the current environmental changes, and because of the various traits both these species have, scientists are trying to find a more favorable and stable breed of Timor variety, which we hope to see in the future for sure.

I might talk about something interesting on other species that maybe later… but for now, do remember:

No matter what you think, be careful when you ask this question to or for anything/anyone “Who is your Daddy?” you might be surprised.

You might be hit with a statement like a question which could turn disappointing to some and interesting to some. In the words of the great educated and learned Delhi people, if Coffea Arabica had said: “ Tu jaanta Nahi Mera Baap Kaun hai !”

Cheers until next time

*Emma Sage is a Coffee Scientist for the SCA, she presented a study on the Coffea genus and species in the 2017, RE CO symposium, her specialisation lies in Botany.

Is it a good time for Coffee? Convince me in the c

@kapikottai’s Mind Blown is a must try, I tried

Did you know? Moka pot was named after the Yemini

NANO CRYSTAL BY KARMA KAAPI This coffee is from C

Is it a good time for Coffee? Convince me in the c

@kapikottai’s Mind Blown is a must try, I tried

Did you know? Moka pot was named after the Yemini

NANO CRYSTAL BY KARMA KAAPI This coffee is from C